PHILANTHROPY BACKGROUND: Greg's involvement in philanthropy began as a child -- starting with the MS Read-a-Thon  As he grew up, his philanthropic efforts expanded. In 1998, he founded The 11-10-02 Foundation.  While it remains a small volunteer-run organization, the foundation has now provided scholarships & grants to students, schools & programs in all 50 states. The organization was the subject of a kind cover story in NonProfit Times. Greg's philanthropic efforts have been featured by other media like Education Week  & The Washington Post.  The foundation was honored as one of America's Daily Points of Light. Separately, Greg was honored individually as one of America's Daily Points of Light.  He also has received meaningful honors like the Jefferson Award for Public Service. SCROLL DOWN 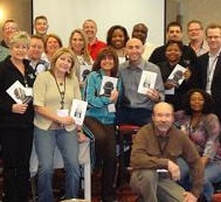 THE BOOKS: On the professional side, the books based on Greg's story include a look at his civic & philanthropic interests and his experiences as a youth that shaped those interests. In many cases, nonprofits (i.e. Saturday Place), community foundations (i.e. Community Foundation of Greater Greensboro), and individual chapters of national organizations (i.e. chapters of National MS Society, Habitat for Humanity, AmeriCorps) have ordered the books &/or the companion workbooks for their Board, staff, volunteers, donors, beneficiaries, teen philanthropy participants &/or other students in their communities. Other nonprofits (i.e. Boston Cares) have sponsored The Elevator Project (a kindness recognition project) in their community.  SCROLL DOWN 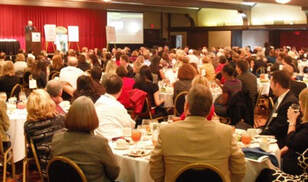 ​EVENTS  FOR ADULTS: Greg has spoken at events in different countries -- including events for nonprofit leaders (i.e. Conference on NonProfit Excellence Awards), for staff of philanthropic organizations (i.e. KU Endowment), for their volunteers (i.e. a chapter of United Way in Canada), for their donors (i.e. Literacy Network of Greater Cincinnati), & for their beneficiaries (i.e. Holocaust Survivors in California). ​In some cases, he has been one of multiple speakers at an event (i.e. At a conference on ethics & social responsibility for business executives, Greg was morning speaker & former Apple CEO John Sculley was lunch speaker). When Greg speaks with an organization's donors, the theme has typically revolved around Intergenerational Impact -- discussing ways that established donors can instill their interest in service & philanthropy into younger generations of their families. SCROLL DOWN 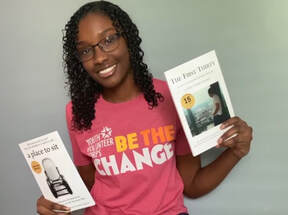 ​​EVENTS FOR STUDENTS: In many cases, Greg has spoken about civic engagement & philanthropy with students  (middle school, high school, college and graduate school). In some cases, this has taken place through a guest lecture or assembly at a school (i.e. University of Connecticut). In other cases, it has occurred at a conference or retreat for a nonprofit (i.e. Diller Teen Fellows Pittsburgh). SCROLL DOWN 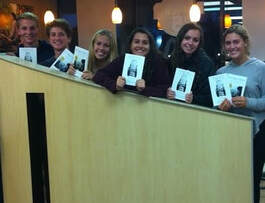 ​In some instances, he has worked with programs (i.e. chapters of Youth Volunteer Corps) specifically geared to teens interested in volunteerism & philanthropy &/or those types of programs have used the books & workbooks. A McDonald's franchise owner got copies of The First Thirty & the companion workbook, A Place To Sit, for every student involved in a teen philanthropy program raising funds for its local Ronald McDonald House & had Greg serve as the group's 'off-site mentor'. To read about what Greg has been doing during the pandemic, click here. 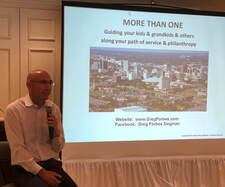 SAM GEIL, COMPANY PRESIDENT, CALIFORNIA: "The Silhouette Man illustrates the responsibilities we have as parents, grandparents, teachers and business leaders to influence the people  around us...."

LAURA B, GENESIS MITZVAH FUND PROGRAM COORDINATOR, JEWISH COMMUNITY FOUNDATION: "...The First Thirty was such an enjoyable read....I intend to use it, along with the companion workbook (A Place To Sit).... for teen philanthropy recruitment."

NICK HEGEMAN, 1ST GRADE TEACHER, WISCONSIN: "The Milkshake Man is a great example of kindness... It shows young readers how one person can help to make a difference and inspire others."
To order Greg's books, click here