As a teen, Greg spent two years living & studying in Louisiana. Since then, he has tried to support &/or highlight Louisiana in different ways. He raised the money to fund four grants, each one named after someone in LA who influenced his path. His Foundation also funded scholarships for students attending college in LA. The books (The First Thirty & The Silhouette Man) based on Greg's story feature Louisiana in a very positive way. His experience in LA has been profiled positively by media like The Washington Post.  He has personally written about LA in positive ways in the media, too. He has written articles (highlighting inspiring LSU alums) for LSU Alumni Magazine. After Hurricane Katrina, he wrote a guest column (for the Chicago Sun-Times) reflecting on the kindness & hospitality that he & so many others have experienced in Louisiana. To read the updated column, scroll down. On a fun note: The first people he ever met from Louisiana? When Greg was a child, years before he lived & studied in Louisiana, he had a chance encounter with the LSU Basketball Team & its Coach Dale Brown (pictured here with Greg) in a hotel. Coach Brown & the team went out of their way to be kind & gave Greg his own jersey. In the months that followed, when the team played in the Midwest, Greg got to attend games & root for his new friends -- foreshadowing the hospitality he would experience from people in Louisiana years later. 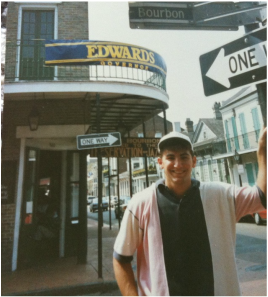 As a kid growing up in the North Shore, I always dreamed of going to college somewhere far away like Cambridge, Massachusetts or Palo Alto, California. Then, life threw me a curve. At the age of 18, I was rejected by Harvard, Stanford...and every other college I hoped to attend.   I was disoriented and lost. My future had been turned upside down. Part of me felt like giving up.  Upon hearing the news, my Grandma sat me down and said I had two options.

I chose the former -- and found a university in Louisiana that was willing to give me a chance.

Despite the school's sympathetic offer, I was reluctant to get on that plane.  I'd never been in the Deep South and had no desire to see what I'd been missing -- but once I opened my mind and explored my new environment, I fell in love with it.

The hospitality, the music, the culture, the diversity - I have still never experienced anything else quite like the two years I spent in Louisiana. And I'm not just talking about the hullabaloo surrounding events like Mardi Gras.  In Louisiana, every day seemed to be a celebration, an excuse to live life to the fullest.

It has been devastating to watch the coverage of the hurricane and its aftermath -- to see familiar places looking so unrecognizable, to see such good people in such a seemingly helpless situation.

As distant witnesses to such an overwhelming tragedy, many of us share that sense of helplessness.  You want to do something but don't feel you can offer any amount of help that would make an actual difference.

If that's how you feel, I'd urge you to think again. Given that hundreds of thousands of people have been affected, I know it might feel like helping a single person won't make a major difference -- but if you don't think your act of kindness would make any difference, ask a person who could use the aid.

I've heard some say they would normally help in an emergency, but they will not in this case because of the 'lawlessness' that has taken place in the days following the disaster.  If you feel that way, I'd urge you to reconsider.  Ask anyone who has lived in that part of the country.  The acts of desperation and frustration you see on TV are an aberration. They are not remotely representative of this warm, inclusive place whose true spirit will shine through before all is said and done.

So, even if you can 'only' provide enough assistance to help one person -- and even if you don't know anyone in the Gulf Coast, so the one person who benefits from your generosity ends up being a complete stranger -- if you did not help last week, I hope you give thought to doing it this week.  It really will make a difference.

If the shoe were on the other foot -- if you were a complete stranger whose future had been turned upside down, and you felt disoriented and lost, and you were on the verge of giving up -- the people of Louisiana would open their doors and hearts and embrace you like family.