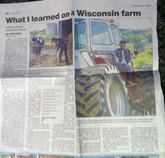 As a kid, I grew up in the suburbs. Farms were a distant concept. Something we read about in class but rarely saw in person. After college, I taught in urban schools and lived in the shadow of skyscrapers. Not many tractors there, either. In recent years, I’ve had the chance to get to know some farmers, but I never worked for one. So, I sincerely had no idea what to expect this weekend. All I did know was how I planned to approach the experience.

When I was a boy, my Grandma loved to say, “You got big ears. Use ‘em.” Throughout my two days working on the farm, I kept those words of wisdom in mind. I did whatever tasks I was assigned. I followed whatever instructions I was given. Along the way, I asked many questions and listened intently to the answers. In the process, I learned a great deal from a family of farmers, their neighbors and their friends.

They introduced me to terms like tillable land and easement. I learned about soybeans, hay and corn.  They explained how the maple syrup on their kitchen counter came from one of their own trees. They showed me how to use granola and some Skittles to figure out if a bear is in the vicinity. They taught me a lot about cows.  (And I found out the hard way that if you step on what appears to be a large rock while walking through a pasture, there is a very good chance that a cow left that ‘large rock’ there.)

They demonstrated how to use the equipment and various vehicles found on a farm. They helped me understand how the weather can impact their daily routine. They educated me on the business of farming -- what they purchase and when, what they sell and where,and the financial risks and rewards that come with the job.

If the lessons ended there, the trip would have been well worth it.   As it turned out, I didn’t just learn about farming.  I also learned about farmers.

I learned that farmers must be flexible. What other option do they have if they plan to cut hay in the morning but wake up to an unexpected storm?

I learned that farmers must be patient and resilient. What else can they be if they spend all afternoon planting seeds – only for an uninvited deer to eat up their efforts?

I learned that farmers are versatile and talented. At any given moment of the day, depending on the task at hand, a farmer is, among other things, part-entrepreneur, part-accountant, part-veterinarian, part-mechanic and part-meteorologist.

In the past, I had heard many stories about the work ethic of farmers, but it is another thing to witness their perseverance in person. My Grandma always said, “The reward for hard work is more hard work.”  Farmers embody that philosophy.

I learned that a farmer’s investment in his property runs much deeper than dollars and cents. During my first afternoon on the farm,one of the farmers and I drove down a trail. A trail that he built. During that drive, we passed a set of tall trees. He pointed at them, smiled and recalled the day that he planted them fifty years earlier. At that moment, I understood – in a whole new way – why a farmer feels such a strong connection to his land.

Over the course of two days and two nights, I also saw the deep bond that exists between a farmer and his family. I learned that all those shared chores and responsibilities require a level ofcommunication and collaboration that links the relatives to each other in a profound way.

Above all else, during my weekend in Wisconsin, I learned that farmers are willing to take the time to teach what they know.

​And, for that, I am very grateful.
--
Greg Forbes Siegman is co-author of The Silhouette Man (& acondensed edition for students, called The First Thirty). The books are available by clicking here..
##